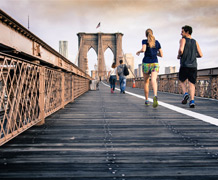 Exercise may benefit patients with heart disease, including heart failure, in a number of ways.

Exercise is associated with a longer life in patients with heart failure, according to research by the University of Exeter Medical School.

The findings are presented today at Heart Failure 2016 and the 3rd World Congress on Acute Heart Failure. This research, funded by an NIHR Senior Investigator Award, included data from more than 4000 patients, and showed that patients who exercised had lower risk of mortality regardless of heart failure severity, age, and gender, compared with similar patients who did not exercise.

Principal investigator Professor Rod Taylor, chair of health services research and director of the Exeter Clinical Trials Unit at the University of Exeter Medical School, said: “Patients with heart failure should not be concerned that exercise may cause them harm, or even kill them. The message for heart failure patients is clear. Exercise is good for you, and it could potentially help you live longer.”

Professor Taylor, an NIHR Senior Investigator, and colleagues previously conducted a meta-analysis (a research method that combines all available relevant data) of randomised trials. This showed that heart failure patients who exercised were admitted to hospital less often and had a better quality of life.

Exercise Training Meta-Analysis of Trials in Heart Failure (ExTraMATCH II) is an international collaboration of researchers who collected data regarding more than 4000 individual patients who participated in 20 clinical trials conducted in 10 countries. The research team investigated the effects of exercise with regard to patient mortality from all causes, and hospital admission, compared with heart failure care that did not involve exercise. Combining data from individual patients who participated in separate trials allowed the researchers to make the best use of the data, and increased the ability to detect differences in outcomes between patients who exercised and those who did not. The use of data from individual patients also allowed the researchers to explore whether there were any differences in the effect of exercise in patients with different characteristics, for example, differences in age, gender, or severity of heart failure.

The investigators found that exercise was associated with an 18% lower risk of death over a particular timescale, and an 11% reduced risk of hospitalisation compared with no exercise. Professor Taylor said: “This analysis did in fact show that patients who exercised had a lower risk of death than those who didn’t.”

The effect of exercise on mortality and hospitalisations did not differ according to any of the patient characteristics that were analysed. “There was no evidence that some heart failure patients gain more from exercise than others,” said Professor Taylor. “The benefits of exercise are consistent regardless of the severity of heart failure, gender, age, and the other factors we looked at.”

Exercise may benefit patients with heart disease, including heart failure, in a number of ways. It improves physical fitness, which is an even stronger predictor of survival than blood pressure or smoking. Exercise improves the oxygen supply to the heart and reduces the likelihood of the abnormal rhythms that can cause sudden death. Physical activity also improves circulation in the peripheral blood vessels, such as in the leg muscles, which may reduce the workload of the heart and improve patients’ ability to function.

Professor Taylor concluded: “This is not about marathon running but rather people with heart failure increasing their routine physical activity – for example walking for 20 to 30 minutes three times at week at an intensity that makes them a little bit breathless. Discuss it with your heart specialist or GP with the belief that it’s going to benefit you.”