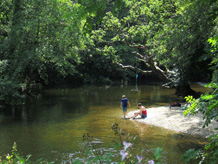 Did you experience drought of ‘76?

Researchers are urging people who experienced the 1976 drought to share their stories of how they coped during the most severe water shortage in living memory.

On the 40th anniversary of the famous heatwave academics want to hear people’s memories of drought and water scarcity.

The responses will provide new evidence for managing future droughts. The study will focus on the impact of drought on seven water catchments in England, including the River Fowey.

Temperatures of 30°C or above were recorded for 16 consecutive days during the heatwave of June 1976 in the South East, and many reservoirs dried up during a predominantly dry spell that gripped the nation.

A four-year £3.2m project named Drought Risk and You (DRY), is bringing together information from a wide variety of sources to help ensure the country is better prepared for another extreme water shortage.

It will explore how water resources can be shared more fairly during droughts and aims to establish a stronger understanding of the needs of a wide range of water-users including water companies, businesses of different sizes, farmers and horticulturalists, river and canal managers, public health organisations and the public in their houses, gardens and allotments.

The four-year interdisciplinary project is bringing together arts, humanities and social sciences with expertise in hydrology, meteorology, agriculture and ecology from eight universities and research institutes.

Dr Tim Taylor, from the University of Exeter Medical School, said: “Drought and water scarcity is likely to become a more significant threat to the UK in the light of climate change and social change. It is important for a number of sectors to appropriately engage with this issue, including health. We are aiming to gain insights from events like those in 1976 to develop tools to assist in the management of future droughts.”

Professor Lindsey McEwen, from UWE Bristol, who is leading the DRY project, said: “We would very much like to hear from people with memories of drought and water scarcity - stories that need to be heard when we prepare for increased future risks of drought.

“It is timely to reflect on what memories and knowledge persist from that period, which spanned over a year, when a dry winter was followed by a dry summer.

“Do memories of the event tell us anything useful about our resilience to future droughts, our perceptions of hot weather and the concerns for water scarcity? The science tells us that the heatwave in June was exceptional by UK standards. The water deficit below the average continued over several months. This drought stands out in terms of its duration and severity in the UK hydrological record of the last 100 years.

“Memories that were only moderately stressed are frequently those of community cohesion, parched grass, drinking wine with neighbours in public spaces, outdoor living. Rather different memories were archived at the time from those directly affected by extreme stresses in the South East and South West – running families, farms and businesses.”

Loughborough University’s Michael Wilson, who is also working on the project, said: “Climate change itself is one of the greatest global threats facing us and requires collective action on a massive scale to address it. However, partly because the science behind climate change is so very complex, the public debate has been dominated by discourses of expertise, thus excluding large parts of the population from engaging. Human beings are storytelling animals and by introducing storytelling into the climate change discussion, we potentially open the door for much wider public engagement, capture expertise from beyond the academic community and bring new, fresh, previously unheard voices into the conversation.”

Professor McEwen, from UWE’s Faculty of Environment and Technology, said: “We are looking at the effects of drought at a variety of scales, from small plots to the entire catchment area of a river. We have set up drought experiments in rural areas and are using these as stimuli for conversations with users about drought risk and how to mitigate this. We are developing a science-narrative approach, as a more reflective and informal way of exchanging information.”

Ragab Ragab, from NERC’s Centre for Ecology & Hydrology at Wallingford, said: “It is evident nowadays that the UK has been subjected to unprecedented events of extreme weather. For example, winter 2013-2014 was marked with flood followed by drought in March 2014. The problem we are facing now is how we build community resilience adapted and able to cope with such changing climate. The UK Met Office indicated that such ‘extreme events’ will become increasingly regular in the future. Scientists are now focusing on solutions to protect the environment from the damage caused by drought extreme events as well as flooding. This project will focus on developing solutions, and risk management strategies for short and long term drought events.”

For more information about the project and the catchments involved, please see DRYproject.co.uk or follow @Project_DRY on Twitter.