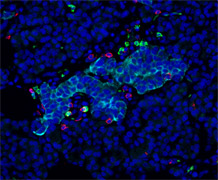 Insulin-secreting cells (blue) in a patient with type 1 diabetes coming under attack from immune cells (red and green). Image courtesy of Pia Leete.

Children who are diagnosed with diabetes before the age of seven develop a more aggressive form of the disease than that seen in teenagers, new research has revealed.

A team led by the University of Exeter Medical School has found for the first time that, while children aged six or under are left with very few insulin-producing beta cells in their pancreas when diagnosed, those with onset of symptomatic type 1 diabetes as teenagers still retain large numbers of these cells. The discovery could lead to new approaches for treatment of the disease.

The team worked with the University of Oslo and the network of Pancreatic Organ Donors (nPOD) to analyse the largest ever collection of biobanked pancreas samples from people with type 1 diabetes. The study, funded by the European Union and the JDRF is published online today in the journal Diabetes. It provides the first clear evidence that children who are diagnosed with type 1 diabetes at the age of six years or under develop a more aggressive form of the disease. A condition known as insulitis, representing an inflammatory process, kills off nearly all the insulin-producing beta cells in the pancreas of the young children. However, the researchers found that progression of the disease is radically different in those diagnosed as teenagers or beyond, who retain unexpectedly large numbers of beta cells at diagnosis – although they are no longer working as they should.

Professor Noel Morgan, of the University of Exeter Medical School, said: “This is incredibly exciting, and could open the doors to new treatments for young people who develop diabetes. It was previously thought that teenagers with type 1 diabetes had lost around 90 per cent of their beta cells but, by looking in their pancreas, we have discovered that this is not true. In fact, those diagnosed in their teens still have many beta cells left – this suggests that the cells are dormant, but not dead. If we can find a way to reactivate these cells so that they resume insulin release, we may be able to slow or even reverse progression of this terrible disease.”

In the UK alone, around 30,000 young people have Type 1 Diabetes, and diagnoses among the younger age group are escalating fast. The team’s discovery also has important implications for this younger group – for example, most trials have focussed mainly on halting the immune attack in older patients, where the team finds that insulitis may be less severe. In future, it will be important to assess whether younger children might benefit most from such approaches, as they have the more aggressive disease.

The team analysed a subset of human samples from people with type 1 diabetes within the Exeter Archival Diabetes Biobank, originally compiled by Professor Alan Foulis a co-author on the study, which he bequeathed to the University of Exeter Medical School when he retired from the University of Glasgow. They then checked and extended their results against larger databases of samples from America and Europe, which confirmed their results.

Dr Sarah Richardson, of the University of Exeter Medical School was co-author on the study. She said: “For trials to be effective, we have to understand the underlying causes of the disease. Until now, most research into the onset of type 1 diabetes has been carried out in animal models. While that’s extremely valuable, there are clear differences in human pathology. Here in Exeter, we now have this incredible resource of a unique biobank of human samples from people with type 1 diabetes, which means we’re able to see what’s really going on in the human body. We’re working with partners across the world to make major advances in this research area. Our next step is to investigate why diabetes progresses differently in younger and older children, with a view to understanding how we could treat both groups more effectively.”

Karen Addington, UK Chief Executive of type 1 diabetes charity JDRF, said: “A child diagnosed with type 1 diabetes at the age of five faces up to 19,000 insulin injections and 50,000 finger-prick blood tests before they reach the age of 18. But research can bring us closer to the day we find the cure.”