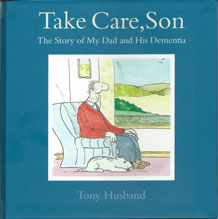 Experts in dementia and those affected by the emotional experience of having a loved one with the condition joined an award-winning cartoonist to discuss the care and support available for those with memory loss.

Tony Husband’s illustrated story Take Care Son movingly chronicles his father’s experience of dementia and has been praised by the comedian and actor Stephen Fry.

Tony’s personal account was a starting point for discussion about dementia care with a panel including experts from the University of Exeter Medical School, Professor Linda Clare and Professor Clive Ballard. The event was held at the Phoenix Arts Centre in Exeter and aimed to increase public awareness about the impact of memory loss and support carers.

Professor Clare is the Director of the Centre for Research in Ageing and Cognitive Health (REACH). Her world-leading research focuses on supporting people with dementia to live well with the condition, and on identifying potential risk factors which are associated with dementia onset. Professor Ballard has recently been appointed as Pro-Vice Chancellor and Executive Dean of the University of Exeter Medical School. His research has pioneered new interventions for people with dementia and has made a major contribution to improving quality of care.

Take Care Son, written as a conversation between father and son, is now used by doctors and in care homes, and Mr Husbands has recently collaborated with the actor Christopher Eccleston to create an animated version of his story.

Tony said: “The book makes people laugh and cry. I had to use humour to show my dad’s decline or it would have been too heartbreaking.

“At this event I spoke about the book and how it has helped to change the way we understand dementia. I also answered questions and told stories about my dad.”

This event was organised by Dr Julia Teale and Dr Ola Kudlicka, dementia researchers at the University of Exeter Medical School.

Dr Teale said: “In the UK, it is estimated that there are approximately 850,000 people living with Alzheimer’s disease - the most common form of dementia. These figures, however, can be overwhelming and impersonal. Our aim is that this event will contribute to raising public awareness of dementia and will show people with dementia and their carers that they are not alone.”

The event is part of the Festival of Social Science which is funded by the Economic and Social Research Council.