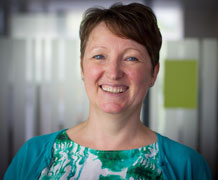 Dr Victoria Goodwin has been awarded a Fellowship from the Chartered Society of Physiotherapy.

A Senior Research Fellow at the University of Exeter Medical School has been awarded a Fellowship from the Chartered Society of Physiotherapy in recognition of her excellence in research, education and partnership working.

She was nominated for the accolade by colleagues who highlighted her commitment and achievements in advancing the physiotherapy profession.

Dr Goodwin said: “I am honoured to have been nominated by my peers for such a prestigious fellowship. I was very surprised by the news but happy to be recognised for the many years I have worked as a physiotherapist, both clinically and academically.”

Dr Sarah Dean, Associate Professor in Psychology Applied to Rehabilitation and Health at the University of Exeter Medical School, was one of the colleagues behind Dr Goodwin’s nomination for the fellowship . She said: “This recognition is extremely well-deserved. Dr Goodwin has been a force for expanding the field of physiotherapy through inspiration and practical support at all levels, as well as her own outstanding work.

Rhoda Allison, Consultant Therapist at the Torbay and Southern Devon Health and Care Trust, led the nomination. She said: ”Dr Goodwin has provided clinical leadership both inside and outside the profession through the extensive work in her academic role.”

Since Dr Goodwin became a physiotherapist in 1995, she has worked comprehensively to promote physiotherapy and services for older people. Her support and encouragement has allowed multiple physiotherapists to further themselves and the field.

This led to her joining AGILE (Chartered Physiotherapists working with Older People), where she helped develop the undergraduate resource booklet and the guidelines for physiotherapy management of older people at risk of falling.

In 2006, she received an NIHR Researcher Development Award to undertake her PhD – specialising in the effect of targeted exercise on falls with people with Parkinson’s.

Throughout her career, she has been an active member of the British Geriatric Society (BGS), providing physiotherapy input through her leadership in the BGS Fall and Bone Health Committee. In addition, she has formed links with centres in other countries and has been instrumental in uniting clinical communities to share ideas.

Currently, her research topics include the evaluation of exercise base interventions in older people in general as well as those with stroke and Parkinson’s.