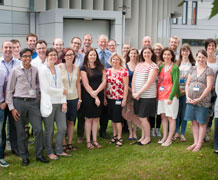 The Exeter Molecular Genetics team has grown considerably since its inception in 1995.

The University of Exeter Medical School has celebrated 20 years of molecular genetics research. An audience of researchers, healthcare staff, patients and past team members attended a symposium where the founding members of the group, Professors Andrew Hattersley, Sian Ellard and Maggie Shepherd, highlighted their ground-breaking work over the past two decades.

Professor Sian Ellard said: “The team at Exeter has been at the forefront of some incredible advances in the genomics of diabetes and other disorders over the past 20 years. We’re proud that our discoveries have meant more tailored treatments for patients, for example allowing thousands of children with a particular form of neonatal diabetes to switch from insulin injections to simple tablets. We are funded by the Wellcome Trust, provide free genetic testing for diabetes to people from more than 80 countries, and we have plenty of exciting new research in development. We thought all this was well worth celebrating.”

The Exeter Molecular Genetics team has grown considerably since its inception in 1995. Between 1995-97, the team had three academic papers published. In the years between 1995-2015, it has received 971, with a number of the group’s researchers named among the most highly cited in the UK – an indication of the high levels of research being conducted and their far-reaching influence. Funding has increased significantly too, rising from £39,000 in the first few years to £100 million overall. Current research funding comes from the National Institute for Health Research, the Wellcome Trust, the Medical Research Council, Diabetes UK and the EU.

The celebration took place in the Research, Innovation, Learning and Development (RILD) building, a partnership between the Medical School and the Royal Devon & Exeter NHS Foundation Trust. The building brings together clinicians and researchers to ensure academics are addressing the questions that arise on wards and in clinics.

The event included an address by Angela Pedder, Chief Executive of the RD&E, and Professor Sir Steve Smith, Vice-Chancellor of the University of Exeter.

Professor Ellard said: “I’d like to thank everyone who came along to find out more about our work and help us celebrate, and above all, a huge thanks to all the staff, students, patients, funders and supporters who make our work possible.”

The celebratory presentation can be watched here: https://www.youtube.com/watch?v=JEo1dSP8M38&feature=youtu.be