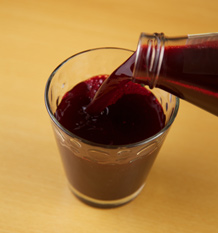 Rugby players take note: drinking high nitrate beetroot juice improves both sprint performance and decision-making during prolonged intermittent exercise such as rugby and football, according to scientists from the University of Exeter.

As excitement mounts for the Rugby World Cup, the research, published in the European Journal of Applied Physiology and available on PubMed, adds further weight to the case for beetroot juice as a superfood for elite both elite and amateur sports players and athletes. Previously, the team at Exeter has regular beetroot juice drinks can help people to exercise for 16% longer.

On day seven, the sportsmen, who were all members of rugby, hockey or football teams, completed an intermittent sprint test which consisted of two 40 minute sessions of repeated two minute blocks. This consisted of a six second all-out sprint, 100 seconds active recovery and 20 seconds of rest, on an exercise bike. At the same time, they were given cognitive tasks designed to test how accurately and how fast they made decisions.

Chris Thompson, of the University of Exeter, who led the study, said: “This research is a really exciting landmark in the work conducted on nitrate supplementation so far. The improvement we found may seem small, but it’s likely to provide a meaningful advantage to the athlete on the sports field. It could mean that team sport players are able to make those important decisions faster and cover more ground than their opponents in the seconds when it matters most.”

Professor Andrew Jones, Associate Dean for Research at the College of Life and Environmental Sciences, University of Exeter commented: “These new results suggest that beetroot juice could improve both physical performance and decision-making during team sports such as rugby and football. In events like the Rugby World Cup, every second counts in those crucial moments, so this improvement could make all the difference”.

BEET IT shots are at the centre of worldwide research in over 150 universities into the benefits of natural dietary nitrate supplementation. The research has identified that their naturally high dietary nitrate content (400mg per shot) interacts with enzymes in saliva to generate nitric oxide in the blood system. Nitric oxide is a vasodilator that increases the flow of blood and oxygen to the muscles, thereby boosting strength and endurance.

The latest research comes as the University of Exeter is named The Times and The Sunday Times Sports University of the Year 2015-16, in recognition of its research, education and performance on the field.