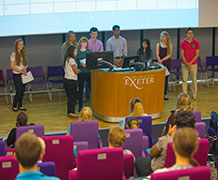 Young people will take part in a unique outreach project in which they will lead and participate in a scientific research project on chemicals in plastic food packaging.

Teenagers in Devon will be mentored by experts at the University of Exeter, and will gain first-hand experience of all aspects of scientific research, from project planning to public engagement.

Funded by the Wellcome Trust and supported by the NIHR Exeter Clinical Research Facility, the citizen science project will see the Year 12s design a study to assess the effects of reducing consumed levels of a common additive to plastic food and drink packaging - Bisphenol A (BPA). Previous studies have suggested that exposure to the chemical may cause changes to how some of our genes behave.

Professor Lorna Harries, at the University of Exeter Medical School, said: “This is a unique way to get teenagers excited about science. We’re hoping to inspire the next generation of researchers by giving them the chance to get involved with every stage of an exciting and relevant research project.”

More than 120 students from six schools will design and take part in a week-long diet to consume fresh or unpackaged foods. Teenagers are known to be the group with the highest levels of BPA in their bodies, and studies have indicated that levels of several common chemicals associated with food packaging can be reduced by up to 70 per cent in just one week by simple dietary measures. The students will give blood and urine samples before and after the diet. They will assess the results by looking at BPA levels in urine and the expression of genes that are responsive to BPA. Laboratory chemicals for the study are being supported by Life Technologies and BD Technology.

As well as analysing their findings, the students will be co-authors on a research paper that will be submitted to an academic journal for publication. . They will also devise and deliver a programme of community and public engagement to communicate the project more widely.

Professor Tamara Galloway, from Biosciences, at the University of Exeter, said: “This project is exciting because it gives young people a chance to see the impact of simple changes in their diet in relation to this commonly found chemical.”