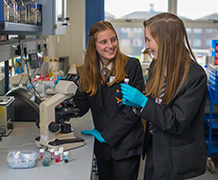 Pupils at Honiton Community College get hands-on in the lab

Scandal has erupted on Devon’s sporting scene as previously unknown athletes smash all known records. Police call on the only team who can scrutinise the mysterious yeast found in their bags: The X-Men in White.

This crack team of nearly 100 science sleuths, drawn from schools across Devon, Dorset and Somerset, was tasked to solve the riddle. Working with special operatives from the University of Exeter Medical School this week, they needed all their genetics genius to identify which of three supervillains is guilty of rigging Devon’s premier sporting event by doping runners with a mutant yeast.

Now celebrating its tenth year, the Medical School’s popular outreach event had an all-new storyline to engage Year 9s from eight schools during British Science Week (March 13 – 22). The engaging plot ensures they get hands-on in the lab, trying out genetic processes seen in TV crime dramas. They stained yeast DNA on slides and examined them under microscopes to find the mutant strain.

Professor Lorna Harries, one of the organisers of the event, which aims to make science more accessible, said: “It’s a fun, interactive way to gain a real understanding of some complex scientific concepts. The pupils work alongside real scientists, and we want to bust some myths that we’re all fuddy-duddy men in white coats. This is our tenth year, and we’re proud that this event has inspired so many pupils across Devon to get excited about our subject.”

Co-organiser Dr John Chilton said: “It’s critical that we motivate the next generation of Devon-bred scientists to consider a career in a stimulating and innovative subject at the cutting-edge of discovery. Who knows - some of these young children may one day come and join our world-leading research team here at Exeter.”

One participant, Jamie from Exeter, said: “It’s a really fun event – I’ve learned loads, and it’s definitely encouraged me to consider science as a career.”

The University of Exeter Medical School runs programmes in Medicine, Medical Sciences and Medical imaging, alongside world-leading research on some of the greatest challenges of our age, including dementia, diabetes and heart disease.