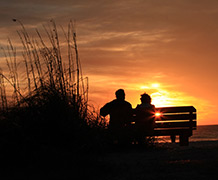 People living close to the coast in England have higher vitamin D levels than inland dwellers, according to a new study published in the journal Environment International.

Exposure to sunlight is a crucial factor in vitamin D production and the research has also found that English coasts tend to see a greater amount of sunlight across the year when compared with inland areas.

Backed by investment from ESF Convergence and conducted by the University of Exeter Medical School in partnership with the Met Office, the study is the first time that data on sunlight and vitamin D levels have been linked to detailed geographical information.

The research team used records from over 7,000 participants – part of the British 1958 Birth Cohort Study – and grouped individuals according to their distance from the coast. They also compiled detailed sunlight data from satellites and ground-based measurements.

They then compared this information to participants’ blood levels of the prehormone 25(OH)D, the major circulating form of vitamin D in the body. They adjusted their findings to account for other factors that can affect vitamin D levels, such as sunscreen use, amounts of outdoor activity, and diet.

The study’s authors believe their findings could be an important piece in the health and wellbeing jigsaw. Researcher Mark Cherrie said: “Recent research has shown that populations living close to the coast tend to have improved health and wellbeing. Whilst coastal environments can promote physical activity and reduce stress, our study suggests that direct physiological factors could also be important, with higher vitamin D levels potentially explaining some of the effects seen.”

Vitamin D has several important functions in the body including controlling calcium to keep bones healthy and regulating the immune system, which could help prevent diseases such as eczema and asthma. The majority of the body’s vitamin D is formed under the skin in a reaction initiated by sunlight, but small amounts are also found in foods like oily fish and eggs.

Christophe Sarran who coordinates the Met Office’s Health research said “We know that our local climates can impact on our health. This study represents an important step in our understanding of how vitamin D varies across the country, and will help us target information about how to alleviate vitamin D deficiency and its associated problems.”

Study lead Dr Nick Osborne said “This study provides further evidence that your health is influenced by where you live, and that the link between vitamin D and health is complex. Whilst exposure to ultraviolet radiation in sunlight is an important factor for the production of vitamin D, it can also have negative health consequences. Prolonged exposure to the sun can increase the risks from conditions such as skin cancer and care must be taken to ensure sun protection and outdoor activities are managed safely.”