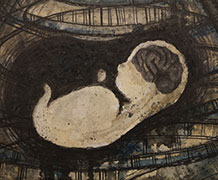 Painting by Helen Spears, first author on the study

Genomic differences between developing male and female brains in the womb

New research by scientists at the University of Exeter and King’s College London has made significant progress towards understanding the complex process of prenatal human brain development.

The study, published today in the journal Genome Research, examined changes in the way that genes are regulated during human brain development. One observation was that a number of differences in a process called DNA methylation were found between male and female brains, potentially contributing to sex differences in behaviour, brain function and disease. The study focussed on the molecular “switches” that regulate the way that genes are activated without changing the underlying DNA blueprint. These processes, known as epigenetics, direct the way in which different cells and tissue types develop, and help differentiate brain cells from those in other parts of the body.

Professor Jonathan Mill, of the University of Exeter Medical School and King’s College London, who led the study, said: “The prenatal period is a time of dramatic plasticity, when the brain is laying down the structures that control neurobiological function across life. Understanding the way in which genes are activated during this important period in the brain could teach us about the origins of disorders with a neurodevelopmental component, such as autism and schizophrenia.”

DNA methylation is the best-understood epigenetic process, a chemical modification to one of the four bases that make up our genetic code. Using cutting-edge technology, the researchers measured genome-wide patterns of DNA methylation in nearly 200 samples, spanning 23 to 184 days after conception. Significant changes in DNA methylation across brain development were found at more than 7% of the 400,000 genomic sites assessed.

Helen Spiers, first author on the study from King’s College London, commented: “Males and females show differences in their susceptibility to some neurological conditions. For example, autism affects five males to every female. Understanding sex differences in brain development may help us understand the origins of these differences.”

The study was part funded by the Medical Research Council and used tissue samples from the MRC/Wellcme Trust Human Developmental Biology Resource (HDBR).