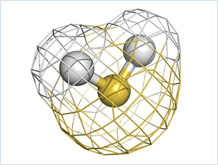 The chemical structure of a hydrogen sulfide molecule

A gas that gives rotten eggs their distinctive odour could one day form the basis of new cardiovascular therapies.

Research has indicated that a new compound, called AP39, which generates minute quantities of the gas hydrogen sulfide inside cells, could be beneficial in cases of high blood pressure and diseases of the blood vessels that occur with ageing and diabetes.

In such conditions, the body’s own levels of hydrogen sulfide are depleted, thought to be consumed by oxidants in the tissues and blood. Now, in laboratory tests, studies led by University of Exeter Medical School, in collaboration with the Slovak Academy of Sciences, found that replenishing these levels through tiny doses of AP39 yielded significant benefits.

The work, supported by the Slovak Research and Development Agency and published in the Nitric Oxide Journal special edition on hydrogen sulfide, found that administration of AP39 to animals with high blood pressure significantly lowered heart rate, blood pressure and blood vessel stiffness.

Professor Matt Whiteman, of the University of Exeter Medical School, who led the study, said: “This research significantly adds to our growing body of evidence that hydrogen sulfide could hold the key to new and effective therapies in humans. We are still at an early stage, but so far the key to success appears to be getting hydrogen sulfide delivered to the right place inside cells and mimicking the way the body naturally produces this gas. The mechanism may be through blocking a calcium channel on the heart that regulates heartbeat, slowing it down. Clinically used drugs which also block this channel have similar effects, but more than 10 fold higher doses are required.”

The research team is now investigating the effects of AP39 in other models of heart and blood vessel disease, such as cardiac arrest and heart attacks.