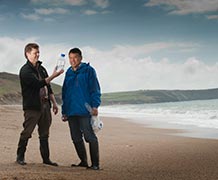 A new £1.2million grant from the Natural Environment Research Council is hoping to boost our understanding of how pollution can promote antibiotic resistance.

Involving several partners from across the UK, including the University of Exeter Medical School, the project will assess the quantities of antibiotics, metals and nutrients present in the environment.

The research will use next generation DNA sequencing to reveal which factors correlate with increased presence of antibiotic resistant bacteria across the catchment area of the River Thames.

The abundance of over 3000 different antibiotic resistance genes will be determined. The team will be taking measurements at 40 sampling sites three times a year, to capture the impacts of seasonal changes and river flow. Combined with data on wastewater treatment and land use throughout the catchment, the team are hoping to produce a model that will reveal the main drivers of antibiotic resistance, as well as their distribution.

Dr William Gaze is leading the research at the Medical School’s European Centre for Environment & Human Health and said: “We’re really hoping to understand how we can design strategies to reduce levels of antibiotic resistant bacteria in the environment. We want to create an affordable test that will allow us to track and monitor the sources of resistance, and feed this into policies aimed at keeping our environment and water sources safe.”

Evolving to combat antibiotics produced by bacteria and fungi, bacterial resistance to antibiotics has existed for hundreds of millions of years in the natural environment. Yet little is known about how these genes make their way into human associated bacteria, or how we can be exposed to these environmental antibiotic resistant bacteria.

Increasing evidence suggests that the use of antibiotics in agriculture contributes to the increase in resistance seen in the clinic, however much less research has focused on evolution of resistance in farm animals than in humans. Even less is known about the presence of resistant bacteria in the natural environment, particularly locations heavily polluted by human or animal waste.

Current treatment processes are unable to remove all resistant bacteria from wastewater, 11 billion litres of which are discharged into UK rivers every day. Simultaneously, millions of tons of animal faeces are spread on agricultural land every year, providing a direct supply of resistant organisms into the environment.

This £1.2 million grant is funded under NERC's Environmental Microbiology and Human Health call and involves the University of Exeter, University of Warwick, Rothamsted Research and the Centre for Ecology and Hydrology. Project partners include University of Birmingham/Public Health England, University of Hong Kong, Association of Rivers Trusts, LGC Ltd, Advanced Anaerobics Ltd, and the Austrian Institute of Technology.