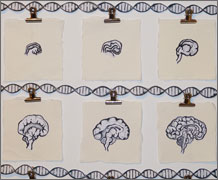 An international research collaboration has shed new light on how DNA sequence variation can influence gene activity in the developing human brain.

An international research collaboration has shed new light on how DNA sequence variation can influence gene activity in the developing human brain.

The team, which was led by researchers at the University of Exeter Medical School, King’s College London and Cardiff University, conducted the first study of how genetic variation influences DNA methylation, an epigenetic modification that can have direct effects on gene expression and function, in the developing brain. In research published in Nature Neuroscience and funded by the Medical Research Council, they demonstrated the potential utility of such data for refining the genetic signals associated with diseases hypothesised to have a neurodevelopmental component, such as schizophrenia.

DNA methylation is a chemical modification to one of the four bases that make up our genetic code, controlling when and where genes are expressed. As with other epigenetic marks, it is known to be dynamic across the life course and modifiable by a number of factors, including the underlying genetic sequence. It represents one possible pathway between genetic variation and disease, with genetic differences altering the regulation of gene expression at specific points in development. In this study the authors found that genetic variants associated with schizophrenia were enriched for changes that impact upon DNA methylation in the developing brain. It is of particular interest that some of the genetic risk factors for schizophrenia are associated with differences in DNA methylation as early as the first and second trimester of life.

Dr Eilis Hannon, of the University of Exeter Medical School, commented: “This data has particular relevance for disorders such as schizophrenia, where it is thought that changes early in brain development increase an individual’s liability to develop the illness later on in life. Therefore understanding the genetic effects of risk variants on gene regulation during the earliest stages of brain development may point us towards the underlying biology of schizophrenia.”

Professor Jonathan Mill, of the University of Exeter Medical School, who led the study, said: “This study builds on the tremendous advances in identifying the genetic risks for schizophrenia in the last couple of years. We have shown that genetic variation can have dramatic effects on gene regulation during brain development, with important implications for understanding the origins of schizophrenia and other disorders with a neurodevelopmental component.”

The data is freely available to the wider research community via an online database (see http://epigenetics.essex.ac.uk/mQTL/) and will potentially facilitate the interpretation of genetic findings in studies of other neurodevelopmental disorders.

The research team was led by the University of Exeter Medical School in a collaboration involving researchers from King’s College London, the Garvan Institute of Medical Research in Australia, the MRC Centre for Neuropsychiatric Genetics and Genomics, Cardiff University School of Medicine, the University of Essex, and the Douglas Mental Health Institute, Canada.