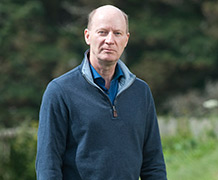 Professor Depledge was bestowed with the honour on Wednesday.

Professor Michael Depledge, one of the University of Exeter’s leading academics, has been elected as an Honorary Fellow to the Royal College of Physicians at a special ceremony in London.

Honorary Fellow is the highest honour the RCP can bestow on a non-medically qualified person, and recognises the extensive work Professor Depledge has contributed to the field of Environment and Human Health, particularly in Cornwall.

Professor Depledge played a pivotal role in establishing the European Centre for Environment & Human Health, based in Truro, and throughout a hugely influential career has pioneered the concept of complex interconnections between environment, human health and wellbeing.

His work has helped to drive policy on climate change and health, chemicals and pharmaceuticals in the environment, and given substantial momentum to the burgeoning concept that interactions with nature can improve our wellbeing.