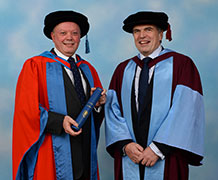 The University of Exeter has awarded an honorary degree to Professor Steve Field, Chief Inspector of General Practice at the Care Quality Commission and Chairman of the National Inclusion Health Board.

The award was part of the University’s commitment to honouring people who have made a significant contribution in their field, nationally and internationally.

Professor Steve Thornton, Dean of the University of Exeter Medical School, gave the oration at the honorary graduation ceremony on January 17. He said: “Throughout his career, Steve Field has sought improvements for some of the most marginalised people in our society. He also works tirelessly to maintain high standards in general practice and healthcare, and as such he is an extremely worth recipient of this honorary degree.”

The National Inclusion Health Board focuses on improving the health care experiences of the most vulnerable in the community, such as the homeless, gypsies and travellers, sex workers and migrants. The Board ensures that such people are seen and heard, and that they have access to quality care.

In addition to these roles, Steve continues to practise as a GP at Bellevue Medical Centre (a large Academic Training Practice) in Birmingham.

Steve was NHS England’s Deputy National Medical Director and the Chairman of the NHS Future Forum. He presented its final reports to the full UK Cabinet in 2011, which led to key changes in the Bill which became the Health and Social Care Act. He then led the review of the NHS Constitution.

Between 2007 and 2010 Steve was Chairman of Council of the Royal College of General Practitioners. For the past 12 years he has been a Member of Faculty at the Harvard Macy Institute, Harvard University. He is a non-executive director of University College London Partners, and Honorary Professor at both the University of Birmingham and the University of Warwick.

Steve received a CBE for Services to Medicine in The Queen’s 2010 New Year’s Honours List.