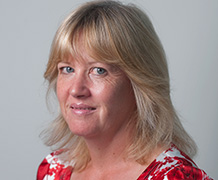 A leading light in genetic diabetes research has been awarded a prestigious national award for outstanding scientists.

Jointly funded by the Wolfson Foundation and the Department for Business, Innovation and Skills (BIS), the scheme aims to provide universities with additional support to enable them to attract science talent from overseas and retain respected UK scientists of outstanding achievement and potential.

Professor Ellard, who is based at the Research, Innovation, Learning and Development building on Barrack Road, a joint enterprise with the Royal Devon & Exeter NHS Foundation Trust, said: “I’m delighted to receive this award, which recognises the research excellence in diabetes and genomics we have here at Exeter. A key element of our success is the close working relationship between the University and NHS Trust, meaning that our research discoveries are quickly translated into new diagnostic genetic tests.”

Professor Ellard co-leads Exeter’s world-leading genetic diabetes team, alongside Professor Andrew Hattersley. Among their achievements, they discovered that around half of patients with neonatal diabetes - which is diagnosed before the age of six months - can be spared a lifetime of injecting themselves with insulin up to five times a day. Instead they simply take tablets which results in  more effective glucose control treatment. The team identified suitable patients for this treatment by making a rapid genetic diagnosis to find those whose diabetes is caused by changes in a potassium channel that regulates insulin secretion.

This world-leading research uses state-of-the-art genomic technology to find the genetic changes that cause the diabetes. A decade on, the team’s work has resulted in a change in international guidelines. Immediate genetic testing is now the norm for babies with diabetes.

Professor Angela Shore, head of research at the University of Exeter Medical School, said: “We’re extremely proud of Sian and her whole team. This research was recently ranked among the best in the world in the Research Excellence Framework 2015. It has a direct impact on quality of life for families affected by diabetes in the South West and worldwide.”