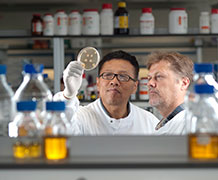 New research finds rivers can be a source of antibiotic resistance

Rivers and streams could be a major source of antibiotic resistance in the environment.

The discovery comes following a joint study between scientists at the University of Exeter Medical School and University of Warwick.

The research found that greater numbers of resistant bacteria exist close to some waste water treatment works, and that these plants are likely to be responsible for at least half of the increase observed.

As increasingly large amounts of antibiotics are released into the environment through both human and agricultural use, the development of antimicrobial resistance has become a significant threat to human health.

One of the study’s lead authors, Dr William Gaze, said: “Antibiotic resistance naturally occurs in the environment, but we don’t yet know how human and agricultural waste is affecting its development. We’ve found that waste water discharges can affect resistance levels - and that improvements in the treatment processes could hold the key to reducing the prevalence of resistant bacteria in the environment.”

The researchers analysed water and sediment samples from 13 sites across the Thames River catchment and developed detailed models to predict the distribution of antibiotic resistant bacteria.

Published in Nature’s The ISME Journal, the study has shown that different types of waste water treatment plant release varying amounts of resistant bacteria. Results also showed links between different compounds and resistance as co-lead on the research, Professor Elizabeth Wellington at the University of Warwick, explains:

The authors were keen to stress that whilst higher levels of antibiotic resistance in rivers and streams could raise the risk of human exposure, more research is required to fully understand the risk posed via this route and its possible implications for public health.

The study Validated predictive modelling of the environmental resistome is published in The ISME Journal and is available here.