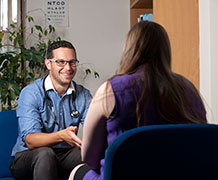 Doctors who unintentionally communicate to patients that they do not believe or understand them could actually make their symptoms worse, a new study suggests.

Lead author Maddy Greville-Harris, from the University of Southampton, said: “Our work indicates that the effects of patients feeling that their doctor doesn’t believe or understand them can be damaging both emotionally and physiologically. This could lead to worsening of illness, known as the ‘nocebo response’. Patients bring certain beliefs and expectations to their health care professional, which are moulded by the culture they live in, and their previous experiences. Their expectations will undoubtedly affect the outcome, but improving communication in consultations could make a big difference to patient care. This is a small study, and more research is needed on a larger scale.”

The researchers recorded and analysed consultations at a pain management clinic involving five women with chronic wide-spread pain. During subsequent interviews patients reported feeling dismissed and disbelieved by healthcare providers, encountering providers who did not invest in them or show insight into their condition. Consultants described receiving conflict and criticism from patients, and encountering patients who held entrenched views or who would not believe their diagnosis. Patients described feeling hopeless and angry after invalidating consultations, feeling an increased need to justify their condition or to avoid particular doctors or treatment altogether.

The team’s earlier work has shown that people who feel disbelieved can lead to increased anger and stress – and that this was much more powerful than positive reinforcement, the well-known “placebo” effect. In the research, 90 participants took part in mathematical tests, and were randomly assigned to an experimenter who either gave understanding feedback, through phrases such as “lots of people find these tests hard”, or non-understanding feedback, through phrases such as “I don’t understand why you’re struggling – it’s just numbers”.

Professor Paul Dieppe, an NIHR Senior Investigator from the University of Exeter Medical School, said: “This study is really about humanity in healthcare. We have found that patients perceive a lack of empathy and understanding, even when the doctor is trying to be comforting. Comments such as ‘there’s no physiological reason that you’re experiencing pain’ seek to reassure, but can be perceived as patronising or disbelieving. We now need to see more research in this area, and for that to feed into training doctors to be more effective communicators for every patient they see.”