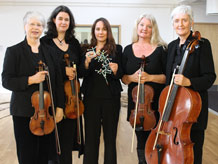 Musical microbes to form part of permanent exhibition at Eden

A unique soundscape created through interpreting the sounds of bacterial molecules in the human body will form part of a new exhibition at the Eden Project.

Invisible You. The Human Microbiome is a new permanent programme that launches on May 21. Among the exhibits is a unique soundscape created by translating the sounds of bacteria in the human body.

The installation combines Shennan’s projected visual imagery together with  science-inspired soundscapes (“microbial music”), created jointly by Dr Long and Hurst in order to explore the nature, meaning and impact of our relationship with the bacteria that live within and on us. to hear the composition, performed by a local string quarter, click here.

Supported by an Invention and Innovation award from Nesta (National Endowment for Science, Technology and the Arts), Dr Long has created a whole new genre of music called “molecular music”. It involves the generation of music from three-dimensional biological molecules called proteins.

Taking raw x-ray crystallography data from four bacteria species found in either the skin of the hand, gut or mouth, Dr Long employs her unique molecular music translation method to create microbial melodies from proteins used by bacteria for antibiotic resistance, vitamin production, disease prevention in new-born babies and tooth decay. Hurst takes these melodies and applies them to a variety of instrumental and electronic samples. He also adds creative accompaniments inspired by genetic sequences. Dr Long says “The resulting installation soundscape, derived directly from, and inspired by, scientific data, creates an immersive experience, making complex biomedical data accessible to all and enabling us to experience our bodies and our connection with our environment in a new and exciting way.”

Victoria Shennan considers the body as an ecosystem. She said: “This installation is intended to illustrate the symbiotic relationship between microbes and the body; how these bacteria encode vital proteins that we need. I wanted to translate the invisible microbial world

A highlight of the May 21 launch event will be a unique live performance by a string quartet of “microbial music” written by Hurst using the scientifically derived melodies created by Dr Long.

Dr Long said: “I’m delighted to be part of this new exhibition, and I hope our installation called “Anthropocene”, featuring computer-generated molecular melodies, will encourage people to reflect on the wonder of the microbiology of their own bodies.”

“Proteins have a special relationship with rDNA because the rDNA encodes them. However, it is their three-dimensional shape which gives proteins their function; and it is their function that gives them meaning through the vital roles they play, both in the bacteria themselves and the human bodies they inhabit. When you break proteins down into their component parts (such as helixes and beta sheets), you can see that these structures repeat. By mapping a protein’s three-dimensional structure into musical parameters, you generate repeating patterns of notes, and it’s the recurring patterns that give the notes meaning and which sound musical – you can hear the themes that emerge from helixes and beta sheets in the proteins, and it helps us make sense of the molecular biology of our own bodies and the bacteria with which we share our bodies. It’s about demystifying molecular biology, and bringing together the seemingly disparate subjects of science and music, so that the public can engage with science in a creative, and inspiring way.”

The installation title “Anthropocene” was chosen by Shennan and is a geologic term that defines the human impact on the earth and its ecosystems. Shennan said “I think when we understand the fragile balance of our microbial ecosystems and the crucial role they play in human health; we will try and protect these diverse habitats.”

The Invisible You. The Human Microbiome exhibition has been created with scientific oversight from experts at the University of Exeter Medical School, including Dr William Gaze and Dr Michiel Vos. The Medical School’s experts in microbiology have also worked closely with New York based exhibitor, Joana Ricou, to develop belly button cultures for her ‘button-ome’ artwork. The team has processed samples in their Penryn-based laboratories, marking quite a departure from their usual work on antibiotic resistance.