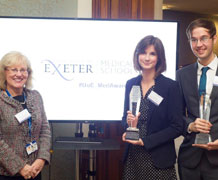 The University of Exeter Medical School has recognised some of its most outstanding students for their commitment and academic excellence.

The University of Exeter Medical School has recognised some of its most outstanding students for their commitment and academic excellence at its annual Prizes and Awards ceremony.

Some of the brightest and best students from Medicine, Medical sciences and Medical Imaging were awarded accolades across a range of categories at an evening event at Reed Hall, on the University’s Streatham Campus.

Professor Steve Thornton, Pro Vice-Chancellor of the University of Exeter Medical School, said: "We’re very proud of these talented students, who have worked incredibly hard over the past year. It’s gratifying to see such potential among the next generation of healthcare and research professionals. Congratulations to them all.”

Among the winners was Thalia Groom, who won the Quintiles Academic Achievement Award for the best performance in her final year on the Medical Sciences programme. Thalia, 22, said: “I can’t believe I won. It’s really encouraging to be recognised in this way. It’s an incentive to keep working hard.”

The Quintiles prize for best PTY year on the Medical Sciences programme went to Samuel Wallis, who approached a cancer immunology specialist at Harvard and gained a year’s experience working in his laboratory. Samuel, from Plymouth, said the experience was “invaluable” to his career development. “It’s not just about improving scientific skills – it’s life skills too,” he said. “It’s all really transferable.”

Samuel, who is now studying Biomedical and Translational Science, added: “I feel very honoured to win this award. It was a great year, and it’s nice to be recognised for the work I put in.”

Lindy Jones, Chairman, European, Middle East and Africa Board, Quintiles, said: “Developing the next generation of scientists and clinicians is crucial for the future of science and medicine in the UK. Quintiles is delighted to support and recognize the likes of Thalia and Samuel who are clearly excelling at what they do.

“Our ability to help our biopharma customers is dependent on our award-winning people. We currently employ approximately nine hundred medical doctors and nine hundred PhDs and we need to continue to attract the brightest and the best as we strive to transform clinical research.”

Some further awards will be presented at a second ceremony on Thursday.

View more photos of the evening on our Flickr album