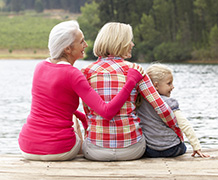 An international study of nearly 70,000 women  has identified more than forty regions of the human genome that are involved in governing at what age a woman goes through the menopause.

An international study of nearly 70,000 women has identified more than forty regions of the human genome that are involved in governing at what age a woman goes through the menopause.

The study, led by scientists at the Universities of Cambridge and Exeter, found that two thirds of those regions contain genes that act to keep DNA healthy, by repairing the small damages that can accumulate with age.

The findings, published today (September 28) in Nature Genetics, suggest that the reproductive cells or ‘eggs’ in a woman’s ovaries (known as oocytes) that repair damaged DNA more efficiently survive longer. This results in a later age at menopause, which marks the end of a woman’s reproductive lifetime. Previous research has shown that DNA is regularly damaged by age and by toxic substances such as cigarette smoke - hence women who smoke go through menopause 1-2 years earlier on average than non-smokers. Our cells have many mechanisms to detect and repair such damage, but cells die when too much damage accumulates. DNA is also damaged and repaired during the production of eggs – therefore these genes might also act to enhance a woman’s pool of eggs which is set in early life.

In a collaboration involving scientists from 177 institutions worldwide, the authors undertook a genome-wide association study of almost 70,000 women of European ancestry.

Dr Anna Murray, a geneticist from the University of Exeter Medical School, and senior author on the paper, described the impact of the findings: ”Many women today are choosing to have babies later in life, but they may find it difficult to conceive naturally because fertility starts to diminish at least 10 years before menopause. Our research has substantially increased our understanding of how reproductive ageing in women happens, which we hope will lead to the development of new treatments to avoid early menopause.”

Dr John Perry from the Medical Research Council (MRC) Epidemiology Unit at the University of Cambridge co-led the study, and said: “We have known for some time that the age at which women go through menopause is partly determined by genes. This study now tells us that there are likely hundreds of genes involved, each altering menopause age by anything from a few weeks to a year. It is striking that genes involved in DNA repair have such an important influence on the age of menopause, which we think is due to their effect on how quickly a woman’s eggs are lost throughout her lifetime.”

The researchers also used these genetic findings to examine links between menopause and other health conditions. They predict that every one year later that menopause occurs increases the risk of developing breast cancer by 6%.

Dr Deborah Thompson from the Department of Public Health and Primary Care at the University of Cambridge also co-led this large international collaboration and said: “One particularly convincing finding was that going through menopause earlier reduces your chances of developing breast cancer and we think this is because these women have less exposure to the hormone oestrogen over their lifetime.”

The next step is to understand in more detail how the genetic variations found in this study are causing alterations in the timing of menopause. Uncovering these mechanisms will hopefully lead to better treatment for conditions linked to menopause, such as infertility and also improved understanding of the heath impact of menopause, such as risk of osteoporosis and heart disease.

Menopause usually occurs between ages 40 to 60 years old, indicated by the end of natural menstrual cycles and in many women by physical symptoms, such as hot flushes, disrupted sleep, and reduced energy levels.

Natural menopause before the age of 40 is often called “primary ovarian insufficiency” and occurs in 1% of women.