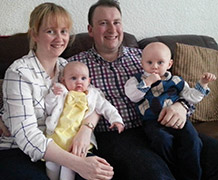 Over a 10 year period, the time that babies receive genetic testing after being diagnosed with diabetes has fallen from over four years to under two months. Pinpointing the exact genetic causes of sometimes rare forms of diabetes is revolutionising healthcare for these patients.

Babies with diabetes are now being immediately genetically tested for all possible 22 genetic causes while previously they would only get genetic testing years after diabetes was diagnosed and then the genes would be tested one at a time. Crucially, this means that the genetic diagnosis is made early, giving the doctor information on how best to treat the patient and inform them of the medical problems the patients are likely to develop in the future.

This is a paradigm shift in how genetic testing fits in with the patients’ clinical symptoms.  In the past symptoms were used to select which gene would be tested - now the early comprehensive gene testing means that the genetic result predicts clinical features that have not yet developed.  This new paradigm means doctors can anticipate the likely problems for their patients and put the appropriate care in place to reduce their impact.

The Wellcome Trust and Diabetes UK funded study is published in The Lancet this week by a team led by the University of Exeter Medical School. It reports the results of genetic testing for the 22 known genetic causes of neonatal diabetes in 1,020 patients over the past ten years.

During this 10 year period, the time for genetic testing after diabetes has fallen from over four years to under two months. The rapid referral time reflects the importance of finding the 40% of patients with a mutation in the pancreas potassium channel genes that can improve their glucose control by swapping their insulin injections for sulphonylurea tablets.  The other change in this decade is that genetic testing has been revolutionised so that instead of testing one gene at a time now it is possible to test all the genes in a single test.

The study shows how early directly comprehensive genetic testing can greatly inform patient care. This model will be applicable to many other branches of medicine and will benefit from present initiatives like the UK 100,000 genomes project which want to help integrate genome sequencing into clinical care.

Professor Andrew Hattersley, of the University of Exeter Medical School, said: “In the last decade, we have shown that making a precise diagnosis from genetic testing results in improved treatment and hence we now get samples soon after diabetes is diagnosed from patients throughout the world.  Now the ability to test all genes in a single test means we are able to accurately inform patients and their doctors - not just about the best treatment but also about likely medical problems before they have started.  This means doctors can start to develop treatment to either prevent or improve these problems. In the past, genetics has been used to confirm a diagnosis and that often took years. Now genetics is being used to give an early, precise diagnosis – this changes how healthcare is practised, and will be seen in many areas in medicine in the future.”

Professor Sian Ellard, who leads the genetic testing at the University of Exeter Medical School, said: “Our results show the power of genomic medicine to change how clinical care is given.  We believe that this is the future for many other rare diseases in all specialities of medicine.”

Dr Alasdair Rankin, Diabetes UK Director of Research, said: "It’s vital that children with neonatal diabetes get early access to genetic testing, so they can receive the correct treatment as soon as possible. We are proud to have supported this ground breaking work, which has capitalised on recent genetic advances to boost our understanding and make a real difference to the lives of children with this rare condition.”

The transformation in the approach to genetic testing over the past 10 years can best be seen in the experiences of the families of babies with diabetes.  A genetic diagnosis that guides treatment and gives information on associated medical problems is now usual within days of being diagnosed with diabetes while10 years ago it was typically more than 4 years before a genetic diagnosis was made.

The Mulligans, from Belfast in Northern Ireland, recently  received a genetic result on then four-month-old baby Matthew within just ten days of taking him into hospital with rash and being found to have high levels of blood sugar.  His consultant sent a sample to the world-leading diabetes genetic team at the University of Exeter Medical School. Their swift genetic analysis discovered that Matthew’s rare form of neonatal diabetes was caused by a mutation in a single gene the insulin gene, meaning that he was not producing insulin and needed insulin therapy but he will not have problems with his brain or gut unlike many other genetic causes of neonatal diabetes. The team recommended an insulin pump, which gives insulin through a cannula under the skin, so sparing the family the trauma of injecting their baby with insulin doses at mealtimes.

Mr Mulligan said: “At first it was horrendous. As a parent, your biggest fear is that your baby is not healthy. With Matthew everything seemed fine. He was thriving - putting on weight and developing well, and the rash was the only sign that there was anything wrong. Taking him to hospital seemed like a precaution.

“Finding out he had a permanent form of diabetes felt like the worst thing in the world at the time. He was just so small and having constant insulin injections. His blood sugar levels were really unstable and he was like a pin cushion from all the blood tests. Although we were shocked and devastated that the genetic tests revealed the condition was permanent, it was a relief that the team recommended the insulin pump. By then we’d done our research and we felt that would be the best form of treatment. Having a swift diagnosis from the team at Exeter that was so precise was also extremely helpful. Knowing that it’s just one gene that causes Matthew’s condition is reassuring, as we know it’s not got  wider implications. We’re also hopeful that one day this research may mean treatments can be more targeted.”

A delayed diagnosis in the past

Emma Matthews, son Jack was diagnosed with diabetes in the first week of life 16 years ago and she did not get a diagnosis of the genetic cause until he was 5 years old.  In the first 5 years she had to not only cope with injections for his diabetes but also his unexplained difficulty walking and failure to speak. When he was 5 she got a genetic diagnosis of a potassium channel mutation explaining both the diabetes and the developmental delay and showing he could come off insulin and be treated with a sulphonylurea that works on this channel.  Emma believes an earlier diagnosis could have made all the difference. Jack, now 15, spoke his first words within weeks of switching from insulin injections to a simple tablet as a result of the diagnosis. Emma, a nurse, said Jack had needed round-the-clock supervision before the switch, saying: “His blood glucose level would go from being stable to being so low that he would collapsed on the floor having a seizure, or in a coma. Every day I woke up believing this could be the day that I found Jack unconscious and I wouldn’t be able to wake him up. I’m absolutely convinced that, if it wasn’t for the work of the team in Exeter, he would be dead by now.”

Although Jack is now far more stable and happy, he has the mental ability of a four-year-old, and Mrs Matthews believes that he could have been spared some of the damage to his brain if he had a genetic  diagnosis as a baby, as is now the norm. “Learning difficulties are part of Jack’s form of diabetes, but we have met families where the diagnosis came earlier and the impact is much milder.”