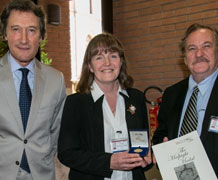 A leading Professor at the University of Exeter has been recognised by receiving the most prestigious European award in her field.

Professor Angela Shore, Head of Research at the University of Exeter Medical School, received the Malpighi Gold Medal and Award from the European Society for Microcirculation (ESM). Currently Professor Shore’s work is funded by the British Heart Foundation, Diabetes UK, European Union IMI JU and NIHR, and investigates new approaches to early identification of vascular complications in the smallest blood vessels in patients with diabetes or those who are at risk of diabetes.

The annual award is given to an individual with an internationally outstanding reputation in the field of microcirculation research. Professor Shore delivered the prestigious Malpighi Lecture at the ESM meeting in Pisa, Italy, and received the Gold Malpighi medal and Free Life Membership of the ESM.

Professor Shore said: “I am deeply honoured to win this award, and delighted that it increases the global visibility of the world-leading research in the field of micro-circulation here at Exeter. My work focuses on being able to identify vascular problems as early as possible so we can identify those at risk of future problems and bring in new treatments to help. I’d like to thank my exceptional team at Exeter, who are key in making this work possible.”

Professor Shore is a global ambassador for Exeter’s research, she is actively involved in Microcirculation research worldwide. She is Treasurer of the European Society for Microcirculation, and represents Europe on the International Liaison Committee.