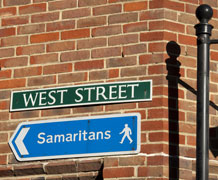 Researchers at the University of Exeter have developed a new practice resource for local authority public health teams in England. Image courtesy of Shutterstock.

Exeter leads the way in prevention of suicides

Researchers at the University of Exeter have developed a new practice resource for local authority public health teams in England, which will help them take action to prevent suicides in public places.

More than 6,000 people die by suicide in the UK every year. Around a third of all suicidal acts take place outside the home, in a public location of some kind. While every suicide is an unnecessary tragedy, these are of particular concern because their impact extends far beyond the usual circle of family members, friends and acquaintances. They can be highly traumatising for bystanders, including children, and those who inadvertently play a part in the death, such as train drivers. They can also attract media attention and sensationalist reporting, which may encourage further suicidal acts.

Preventing suicides in public places occupies a key place in the national suicide prevention strategy for England, and in 2014 Public Health England commissioned new guidance for local authority public health teams to support implementation of this area of the strategy. Dr Christabel Owens, Senior Research Fellow at the University of Exeter Medical School, was appointed to lead the work.

The new resource is designed to help public health teams identify sites and structures in their local areas that are used for acts of suicide, and to take action to prevent further deaths at those locations.

Dr Owens said: “Local authority public health teams are responsible for developing and implementing a local action plan to prevent suicides, but many of the bigger issues in suicide prevention are difficult to address at local level. This one can only be tackled at local level. There are lots of practical things that local multi-agency suicide prevention groups can do to prevent public places being used for acts of suicide and to increase the chances of last-minute human intervention.”

They include ‘hard’ engineering solutions, such as raising the height of parapets on bridges or installing CCTV and video analytic technology, and ‘soft’ solutions designed to increase opportunities for help-seeking by the suicidal individual and equip members of the public with the skills and confidence to intervene.

Publication of the guidance comes shortly after a visit to the university by Jonny Benjamin, well-known for his critically-acclaimed Channel 4 documentary 'The Stranger on the Bridge'. In 2008, Jonny went to Waterloo Bridge intending to take his own life, but was prevented from jumping by the kindness of a passer-by. The documentary follows his quest, six years later, to find this ‘Good Samaritan’ and thank him. On 23rd November 2015, Jonny gave a talk in Exeter organised by the University’s Mind Your Head Society.

In keeping with Jonny’s message, the new guidance urges local authorities to do more to address public fear and reticence about suicide and to make public education a priority, so that more people feel able to stop and offer help if they see someone in a public place who may be contemplating suicide.

Development of the new resource involved reviewing international scientific, policy and practice literature, consulting authorities in the UK and worldwide about sites at which effective local action appears to have been taken and collecting evidence of good practice, and interviewing a number of individuals who have tried to take their own lives in public places.

It builds on earlier guidance that was also developed in Exeter and has had global impact, including influencing the decision to install suicide prevention netting on the Golden Gate Bridge in San Francisco.

Helen Garnham, Public Health Manager - Mental Health, Public Health England, said: “Suicide prevention is a major programme of work for us at Public Health England. Our belief and starting point is that suicide is not inevitable, and our role is to support the public health system to save lives. By linking with experts from the University of Exeter we’ve been able to create a resource which will be of real value to those working locally to prevent suicide.”

Dr Owens leads a programme of research into the prevention of suicides in non-clinical populations and settings and is one of the UK’s foremost experts in suicide prevention.

If you are feeling suicidal, are concerned about someone else or have been affected by issues relating to suicide and would like to talk to someone, contact Samaritans: http://www.samaritans.org/how-we-can-help-you/contact-us.