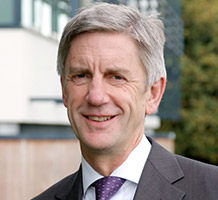 Cornwall “in the vanguard” for radical UK healthcare reform

Cornwall’s Unitary Authority status and potential for devolved budgetary powers puts it in prime position to make the radical and urgent changes required to make healthcare sustainable and fit for purpose in the 21st Century.

This declaration was made by leading healthcare academic Professor Sir John Tooke giving the 2015 President’s Lecture for the Duchy Health Charity (DHC). In an event co-sponsored by the universities of Exeter and Plymouth, he revealed his vision for a fully-integrated healthcare system across the UK which strips out layers of bureaucracy and puts the citizen at its heart.

Sir John, President of the Academy of Medical Sciences and who was instrumental in creating the Peninsula College of Medicine and Dentistry for the South West, believes the highly politicised nature of the NHS - 70 years old and so close to the hearts of the British people – makes radical change difficult, “but change it must if it is to respond to 21 century challenges and opportunities in an affordable manner.”

The Lecture in Cornwall’s Council Chamber was attended by 150 health, social care and third sector professionals, academics and politicians and watched on a webcast by the region’s MPs. It was greeted with widespread support, with immediate approaches to the Duchy Health Charity to facilitate a series of seminars bringing together all interested parties to debate urgent action.

Among his detailed proposals, built on a lifetime of experience in the NHS, Sir John would see health and social care fully integrated and run by a single “accountable care organisation” (ACO), scrapping the complex current clinical commissioning arrangements between primary and secondary care.

Crucial to success would be a working model of shared budgetary responsibility – Capitation Funding.   The whole primary, secondary and public health budget, together with the associated social care budget, would be allocated to the ACO on a 15 year contract.  This would give a time frame in which there would be the incentive to invest in prevention and community provision and see health outcomes and efficiency benefits well within the term of the contract.

The ACO would adjust its single capitation budget to account for factors affecting its own particular population: for example, Cornwall has a population that more than doubles in the summer, that has an aging population, social deprivation and one of the highest suicide rates per capita in the country – all of which would need careful consideration in any rounded healthcare package.

“Cornwall has a great opportunity given its Unitary Authority status,” Sir John says. “A key way of ensuring that a comprehensive service is delivered to all citizens based on need is through integrating primary care, hospital care, public health and social and residential care. Unitary Authority Status would enable the creation of a single Accountable Care Organisation to run all of that.

“It’s a hard task. It involves building relationships and trust and being in it for the long term. Integration is an easy word to say but it’s very difficult to achieve. It will mean that all of the institutions involved have to subjugate their own special interests for the common good.”

“We now have a golden – but narrow - window of opportunity to work together and use the devolution of powers and potentially health budget in a trailblazing way,” he says.  “Our charity exists to promote the health and well-being of the people of Cornwall and the Isles of Scilly and we look forward to helping further a debate which puts the interests of the people firmly at its heart.”

A full version of Professor Sir John Tooke’s 2015 President’s Lecture for the Duchy Health Charity can be viewed below, while Cornwall Council’s webcast of the Lecture including the Question & Answer session afterwards is at  http://www.cornwall.public-i.tv/core/portal/webcast_interactive/187851.