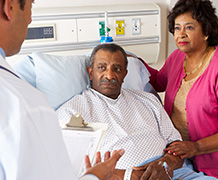 Black men less willing to be investigated for prostate cancer

The incidence of prostate cancer among men of Afro-Caribbean origin is higher than in white men, they are more likely to be diagnosed as emergencies and their mortality rates are higher. Until now it has been unclear why these disappointing outcomes exist.

To investigate the possible effects of patients’ preferences and choices, a team led by the University of Exeter Medical School carried out a study in more than 500 men attending general practices in Bristol. The research was supported by the NIHR Collaboration for Leadership in Applied Health Research and Care South West Peninsula (PenCLAHRC).

The men were presented with realistic hypothetical scenarios - each included a description of a prostate cancer symptom and the estimated risk of prostate cancer. Working with colleagues at the Universities of Bristol and UCL, the researchers found that preference for investigation was lower in black men irrespective of the risk presented in the scenario. This difference was strongest in relation to the scenarios associated with the lowest risk level, with just 44 per cent of black males opting for investigation compared with 91 per cent of white males. In both groups, the most common reason for declining investigation was low risk, but significantly more black men stated that they simply did not want to know if they had cancer.

The study, published on March 2 in the British Journal of General Practice (BJGP), was led by Tanimola Martins, at the University of Exeter Medical School. He said: “We know that black men are significantly more likely to develop prostate cancer, and are more likely to die from it. For the first time, this study has found evidence that black men are less willing than white men to be tested for the disease. GPs should be aware of the reduced appetite for testing in black males, which may be linked to fear and a perception that treatment may lead to severe complications. Doctors could consider proactively discussing the subject. Education targeted at the black community and the health professionals who treat them may also help to address this.”

Professor Willie Hamilton, of the University of Exeter Medical School, outlined the next steps. He said: “We know that black people have worse outcomes with other cancers, particularly breast cancer. To address this, we need to understand the reasons behind that, and this could be a significant step on that journey.”

Dr Jonathan Banks, one of the study’s co-authors from the University of Bristol’s Centre for Academic Primary Care, said: “The findings help us understand some of the reasons why black males have a lower preference for investigation in prostate cancer. We hope these findings may lead to new ways to help educate the black community and the health professionals who treat them about symptoms and the importance of early investigation.”

Tony Wong, African & African Caribbean Project Manager at Prostate Cancer UK said: “We’ve known for some time that black men are often reluctant to be tested for prostate cancer and it’s a real worry. With 1 in 4 black men set to be diagnosed with prostate cancer in their lifetime and still so much we don’t know about why black men face a higher than average risk, or what can be done about it, this is an issue that needs addressing now. We urgently need black men to come forward to take part in research to help  find the answers. Until then, awareness of risk is a man’s best line of defence. So if you are a black man over the age of 45, it is  important that you have a conversation with your GP about your risk and what to do about it.

“Prostate Cancer UK is urging people to sign for Men United - our growing movement for everyone that believes men are worth fighting for. We need more people to sign up and raise money to help us fund the research that can help  beat prostate cancer once and for all.”