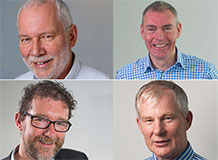 The National Institute for Health Research (NIHR) has recognised researchers at the University of Exeter Medical School as being among the most outstanding health researchers in the UK.

Three researchers have been appointed as NIHR Senior Investigators. Professor David Richards has been appointed for a second term as a Senior Investigator. Professor Richards leads research in increasing access to mental health care and improving the evidence base for nursing. Professor Rod Taylor, who works in the field of cardiac secondary prevention and rehabilitation, has received the accolade for the first time.

Professor Rod Taylor said he was “delighted and privileged” to receive the award and join the NIHR College of Senior Investigators for the next five years. He said: “This award is great recognition for Exeter and the South West and my colleagues and collaborators regionally, nationally and internationally in the field of secondary cardiac prevention and rehabilitation research. Our programme of research promises a continuing pipeline of impactful evidence for people with heart disease and their carers and for health service providers and policy makers.”

Professor David Richards said: “Research to improve patient care in the NHS and beyond is fundamental to what we do here at the Medical School in Exeter. This award recognises the importance NIHR gives to that work. To be personally recognised as one of the top 200 health researchers in the country is a great honour.”

Professor Angela Shore, head of research at the University of Exeter Medical School, said: “Congratulations to all recipients of these awards, which are recognition of the outstanding calibre we have in Exeter in a range of fields with a direct impact on healthcare. This research has significant benefits both in the South West and across the world.”