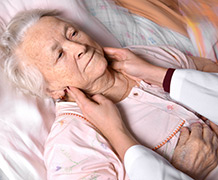 Referring patients with unexplained swollen neck glands for specialist investigations could help to avoid some of the thousands of deaths each year from lymphoma, a type of cancer.

New research led by the University of Exeter Medical School, published today in the British Journal of General Practice, has concluded that persistent enlarged lymph glands, found in the neck, should be referred for further investigation when detected in clinic.

Each year in the UK, more than 14,500 people in are diagnosed with a form of lymphoma, and nearly 5,000 die from the disease, with latest available figures from 1995 to 1999 showing that more than 6,320 deaths were avoidable in this period. The death rate is higher in the UK than the average across Europe. To reverse this trend and improve prospects, earlier diagnosis is key.  More than 40 per cent of patients visited their GP with symptoms three or more times before being referred for cancer investigations.

Now, the University of Exeter Medical School has worked with colleagues in the Universities of Oxford, Cambridge and Bangor in two associated studies which were funded by NIHR. Both studies concluded that persistent swollen glands indicate a high risk of this type of cancer. This is the first studies to investigate the full risk profile for either type of lymphoma in general practice – where most patients first attend.  Professor Willie Hamilton, of the University of Exeter Medical School, who oversaw the study, said: “Cancer guidelines are based on the most robust evidence, and up to now this has been missing. Our research has revealed the importance of persistent swollen lymph glands, particularly in the neck, as part of cancer. Of course swollen glands are common with throat infections, but in cancer, they are usually larger and painless. It’s been known for a long time that this could represent cancer – this study shows that the risk is higher than previously thought.”

Both papers focussed on patients over the age of 40. The first was a large-scale assessment of symptoms which were markers of non-Hodgkin Lymphoma, the more prevalent of the two types of lymphoma, with 12,800 new cases diagnosed each year.  The team used data from UK primary care patient records from the Clinical Practice Research Datalink (CPRD), and looked at cases diagnosed between January 200 and December 2009. The data provided 4,799 cases, with more than 19,000 controls.

The second study assessed 283 patients over the age of 40 with Hodgkin Lymphoma, comparing them with 1,237 control cases. The findings were remarkably similar in both studies – demonstrating the importance of swollen lymph glands – particularly in the neck. No blood tests were really helpful in confirming or refuting the diagnosis.

Dr Liz Shephard, of the University of Exeter Medical School, was lead author on the study. She said: “Early diagnosis is vital to reducing cancer deaths. We now hope that this research will feed into guidelines to help GPs refer earlier and potentially to save lives.”