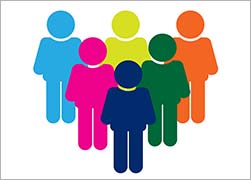 The Obesity Research Group is closely interlinked with the NIHR Clinical Research Facility at Wonford. The unit is led by Dr Katarina Kos, who is a senior lecturer, but also the clinical lead of the weight management services at the RD&E and works in the field of diabetes and endocrinology. Obesity and type two diabetes are closely interlinked, so we have well established collaborations with the Diabetes Research Network as well as various clinical NHS partners including bariatric (weight loss) surgeons.

A particular focus and expertise of the group is the molecular biology of adipose tissue. Fat or adipose tissue is not a simple storage organ of surplus lipids in form of triglycerides, but a metabolically active endocrine organ. It secretes various hormones, which are called adipokines, by which fat tissue itself can regulate appetite and cross talk with other organs. With increasing weight gain, fat tissue becomes dysfunctional and its hormonal output, the secretion of adipokines, becomes disturbed. As a result, adipose tissue becomes inflamed, hypoxic, scarred and increasingly unable to store surplus nutritional fat, which predisposes to the development of the metabolic syndrome, including insulin resistance and  aids the progression to type two diabetes.

Highlights of the research group include the discovery of a protein which influences the scarring (fibrosis) of fat tissue called SPARC (Secreted protein, acidic and rich in cysteine) or osteonectin. Apart from its role in remodelling of the extra-cellular matrix which can progress to scarring in various organs, it also appears to be involved in the development of type two diabetes.

Amongst its many projects, the group is exploring what makes obese adipose tissue dysfunctional and studying the mechanisms underlying obesity complications, such as insulin resistance, obstructive sleep apnoea and fatty liver disease.

The unit is rapidly expanding and recruiting clinical and non-clinical students and academics. 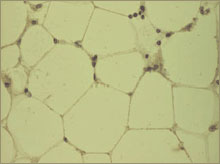 Magnified human fat tissue, in which fat droplets were removed leaving a net-like structure which could be described as the fat-cell skeleton surrounded by the extracellular matrix. With an increase in fat mass fat cells (adipocytes) are progressively surrounded by inflammatory cells (macrophages).