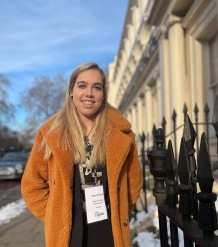 Emily Stevenson has recently started a PhD investigating microplastics as vectors for antimicrobial resistance in aquatic systems, under the supervision of Dr Aimee Murray and Professor Angus Buckling at the University of Exeter, and Professor Pennie Lindeque and Dr Matthew Cole at Plymouth Marine Laboratory. Emily’s research aims to investigate whether microplastics are important platforms for the growth, enrichment and dissemination of AMR biofilms, and whether there are associated ecological implications of microplastics, antimicrobials and AMR on the gut microbiota of marine organisms. This builds on research Emily carried out during her Masters degree in 2019/20 in which she researched the role of microplastics in the dissemination of potentially pathogenic or antibiotic resistant bacteria.

Between completing her Masters and beginning her PhD, Emily worked on a project with the University of Exeter’s Medical School, MRC Centre for Medical Mycology and the Environment Agency, investigating antifungal resistance in the environment, and she has also continued to research antimicrobial resistance in the environment as a research technician for Dr Aimee Murray, working on Dr Murray’s ‘SELECT method’.

Emily is also actively engaged in public engagement and policy-influencing: in 2021, she joined the official youth engagement group of the G7 on the ‘climate and environment policy track’, ensuring that the environmental policy priorities of the youth (those aged 18-30) are heard and considered at the highest level of international decision making.

Emily is also the co-founder of Cornwall based conservation NGO, Beach Guardian. Beach Guardian aims to empower communities to tackle plastic waste, and addresses critical environmental issues across community, industry and policy levels. Since 2017, Beach Guardian has engaged with every primary & secondary school and college in Cornwall, and worked with some of the world’s largest corporations, to help them reduce their reliance on plastics, such as PepsiCo and Nissan.