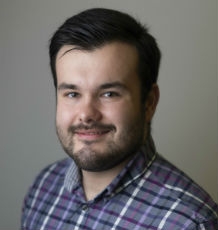 Elliot is a PhD candidate working within the MRC Centre for Medical Mycology, working with Professor Adilia Warris looking at Aspergillus fumigatus infections in patients with Cystic Fibrosis. He graduated from the University of Southampton in 2019 after completing a 4-year integrated Masters course in Biomedical Science and later the same year moved to Exeter to begin his PhD.

Cystic Fibrosis is an inherited disease and is often used as an example of Mendelian inheritance, as it is caused by mutations in a single gene which affects the function of a single protein (Cystic Fibrosis Transmembrane Regulator or CFTR). This protein is a chloride transporter found in epithelial cells and its loss of function in cystic fibrosis causes a disruption in fluid dynamics which results in a thick sticky mucus.

This desiccated mucus cannot be removed from the airways by the cilia and must be removed through mechanical means (coughing). This mucus is a perfect breeding ground for many different microbes, which can exacerbate the disease. Aspergillus fumigatus is a fungus found ubiquitously; however, it doesn’t usually cause us any problems as our immune systems can quickly remove or destroy it. However, in cystic fibrosis patients Aspergillus infection can be devastating, this is due to the damage the body causes trying to destroy the fungus as well as the damage that the fungus does to the body

Currently Aspergillus infections in Cystic Fibrosis patients are treated with a combination of antifungals (which can be toxic) and anti-inflammatory drugs (which have many side effects due to being non-specific).Through the duration of this PhD, Elliot will be attempting to understand the mechanisms of the inflammatory response to Aspergillus fumigatus and illuminate a way of decreasing inflammation (and its side effects) whilst increasing fungal clearance.