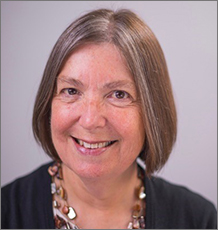 As of 1st September 2020 I have retired from the University of Exeter but I remain available for external examining and advisory roles. I can still be contacted at my university email address.

Christabel is a social scientist who has been working in the field of mental health and illness since 1997. Until recently, she led a programme of applied mental health research with a particular focus on suicide and self-harming behaviour, particularly among people who are not in contact with mental health services, and specialising in qualitative and participatory research methods. Her work has been funded by the Medical Research Council, the Department of Health, the National Institute for Mental Health in England (NIMHE), the National Institute for Health Research (NIHR) and numerous charities.

• Prevention of suicide in non-clinical populations and settings
• Communication about suicide and risk within domestic and social settings
• Development of interventions to support people who self-harm, and methods for measuring outcomes
• Qualitative and participatory research methods
• Public engagement in research

Drawing on my background in the social sciences and philosophy, I work outside the dominant medico-psychiatric paradigm and try to understand suicide from the point of view of family members and friends who are caught up in the process.

Most research in the field of suicide has focused on the role of health professionals in identifying and managing risk, but a high proportion of those who take their own lives are non-users of clinical services. In these cases, the burden of care lies entirely with relatives and friends. We know very little about the part they can play in suicide prevention or the resources they need in order to do so.

My work focuses on this neglected area and aims to strengthen the capacity of lay people (as opposed to health professionals) to recognise and respond effectively to someone who is experiencing a suicidal crisis. This research is highlighted in the national suicide prevention strategy (Preventing Suicide in England: a cross-government outcomes strategy to save lives. DoH, 2012) and has been used to inform public education initiatives on both sides of the Atlantic.

I am also well known for my work on the prevention of suicides in public places. I wrote the first ever national Guidance on action to be taken at suicide hotspots, published in 2006 by the Department of Health, to help local authorities identify and manage locations, such as bridges, cliffs and other sites, that offer means or opportunity for suicide. Being the first guidance on this topic anywhere in the world, this aroused considerable international interest. It was translated into Japanese in 2007, was adapted for use in Scotland and Australia and has been cited in support of capital projects to improve safety at several iconic locations worldwide. In 2014 I was commissioned by Public Health England to update it and the fully revised guidance, Preventing Suicides in Public Places: A Practice Resource, was published in December 2015. I am regularly contacted by agencies from around the world for advice on the identification and management of sites that are associated with suicide.

Other work has included a number of innovative projects to support self-management of self-harm, and studies examining the mental health needs of offenders.

Scientific Advisor to The Alliance of Suicide Prevention Charities

Advisor to the Campaign Against Living Miserably (CALM)

Reviewer for a wide range of journals and funding bodies

2015  World Congress of the International Association for Suicide Prevention, Montreal