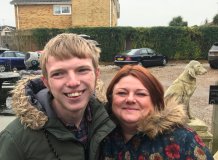 Over a decade, Emma Matthews has progressed from fearing for her son’s life every night to being safe in the knowledge that his diabetes is well managed thanks to the long-term success of “miracle treatment” tablets.

Until he was four, Jack frequently had life-threatening low blood sugar (hypos) at night as a result of the insulin injections he took several times a day to treat his neonatal diabetes. He was among the first to switch from insulin injections to sulphonylurea tablets 14 years ago, thanks to research led by the University of Exeter ‘involving an international collaboration with groups in Norway, Italy, France and Poland. . Today, the team’s new research in The Lancet Diabetes and Endocrinology reveals that the treatment is just as successful over the long-term and still providing excellent sugar control after 10 years.

Neonatal diabetes is diagnosed before the age of six months. Half of all cases are caused by a mutation in their KCNJ11 gene – which is involved in keeping insulin-producing cells in the pancreas working properly. This results in life threatening diabetes soon after birth. Led by the University of Exeter, the new decade-long analysis of 81 patients from 20 different countries was funded by the Wellcome Trust and Diabetes UK. It shows that these people can be treated successfully through sulphonylurea tablets, with excellent blood sugar control in the long term.

Professor Andrew Hattersley is the lead of the genetic diabetes research team at the University of Exeter Medical School. In 2006, they discovered that around half of people with neonatal diabetes can come off insulin injections and be treated more effectively with sulphonylurea tablets. In these people, the tablets provide the key to unlocking the closed door of the insulin-producing beta cells.

Professor Hattersley said: “Switching from regular insulin injections was life-changing for these people who had been on insulin all their life; many described it as “a miracle treatment”. Not only does this eradicate the need to inject with insulin several times a day, it also means much better blood sugar control. This is the first study to establish that this treatment is safe and works excellently for at least 10 years and all indications are that it will continue to work for decades more. This is great news for the thousands of patients who have made the switch from insulin.”

Dr Pamela Bowman, of the University of Exeter Medical School, who led the study, said: “It was incredibly exciting to help people make the switch from insulin to simple tablets – but the question was, would the benefits last? Half of people with type 2 diabetes treated with sulphonylureas no longer have good blood sugar control after five years. Our study has found that in neonatal diabetes, the tablets are safe and they work long term – with 93% of people in the study remaining on sulphonylureas alone after 10 years, with excellent blood sugar control.”

Today, Jack’s diabetes is so well managed that Emma has not had to worry about his condition since he changed treatment.

“It’s like we’ve gone from living in a horror film to living in a rom com,” said Emma, a nurse from Leigh-on-Sea in Essex. “Before Jack switched treatment, every single night was a living nightmare. His blood sugar levels were all over the place, and I didn’t think he was going to be alive when I went into his bedroom in the morning.”

Now, Jack has recently celebrated his 18th birthday, with 150 guests. “We’re so proud of our charming young man,” said Emma. “He makes friends wherever he goes. Dealing with Jack’s diabetes was particularly hard because of his severe learning difficulties. I honestly don’t think he’d still be with us if it wasn’t for the research at Exeter.”

Dr Elizabeth Robertson, Director of Research at Diabetes UK, said: “It’s so important that people living with rare forms of diabetes, like neonatal diabetes, receive the right diagnosis and treatment. That’s why we are delighted to have been able to help fund this vital work, demonstrating for the first time that sulphonylurea tablets are a safe and effective way for some people with neonatal diabetes to manage their condition for the long term. Moving forward, we hope research will uncover ways to prevent the developmental issues people with neonatal diabetes face.

“Nine out of ten people with this condition can switch from insulin therapy when they get the right diagnosis, so we would like all children diagnosed with diabetes under six months to be tested for neonatal diabetes, so the right treatment can help them get the best start in life.”

The paper, ‘Effectiveness and safety of long-term treatment with sulphonylureas in neonatal diabetes due to KCNJ11 mutations: an international cohort study’ is published in The Lancet Diabetes and Endocrinology.