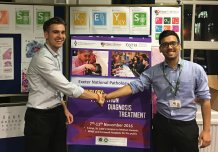 Bogdan (left) and Navin (right) collaborated on the paper

Two Medicine students have collaborated with a national expert to produce a national paper on the teaching of Pathology in Medicine.

Navin Mukundu Nagesh & Bogdan Chiva Giurca worked with Dr Suzy Lishman to produce the paper, which aims to raise awareness of the value of Pathology as a science, and to improve student understanding of certain key topics through student-led teaching.

Dr Lishman was named one of the 50 most influential women in healthcare in 2013, and was described by the Health Service journal as “the public face of Pathology”. She was president of the Royal College of Pathologists until November 2017.

The paper, Innovating undergraduate Pathology education through public engagement, analyses the public engagement model at National Pathology Week, a project run by the Royal College of Pathologists. The model empowers students to learn Pathology by teaching it to members of the community.

Students from the University’s Medicine, Medical Sciences, and Medical Imaging programmes signed up to teach the public, with 125 volunteering. They were supported by pathologists and allied healthcare professionals from the Royal Devon and Exeter hospital.

Students’ reported that their own personal understanding of Pathology improved following the study.

Navin said: “This educational activity was the largest public engagement event for Pathology in the South West region. We’re really proud of our fellow students who have shown great enthusiasm and hard work in developing our novel public engagement model. We hope to incorporate this model into other aspects of undergraduate medical education."

It comes at a time when the University of Exeter has made revisions to its Medicine curriculum, including in the teaching of areas of Pathology such as anatomy and histopathology.

Jean McEwan, Vice Dean (Education) at the Medical School said: “It’s great to see such a level of interest and initiative from our students. This unique collaboration has produced a great example of how undergraduate education and teaching can combine with wider public understanding of medicine and health.”

The BMBS programme is currently undergoing review and revision and many areas are being enhanced, including the teaching and learning in fundamental sciences such as anatomy and pathology. Changes to the teaching include: