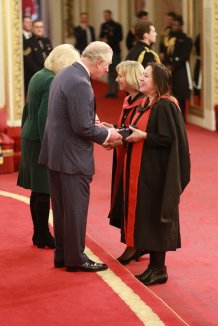 Prince Charles has today awarded the Queen’s Anniversary Prize for Higher Education to a team at the University of Exeter for the pivotal role it has played to expose the devastating effect that plastics pollution has on the health of humans and wildlife.

This prestigious national honour is approved by The Queen on the advice of the Prime Minister following recommendations by the Awards Council of the Royal Anniversary Trust, which administers the Prizes scheme.

It was presented for a series of in-depth studies into the global impact plastics of micro and nano-plastics – small plastic particles less than 1mm in length -which are increasingly contaminating the natural environment. Crucially, this can have implications for the rest of the food chain, including humans.

Significantly, the research project has played a leading role in shaping the worldwide blueprint for not only reducing the use of microbeads in cosmetics, but also directing a clarion call to action to tackle the modern “throwaway culture” which has led to vast floating islands of plastic waste plaguing many of the world’s oceans.

Professor Tamara Galloway, one of the world’s leading experts in microplastics research said: “It feels wonderful to be a part of this prestigious award. I’m passionate about protecting the environment and am constantly amazed at the positive global reception our research has had. I’m so proud of all the researchers in my team whose hard work has been recognised and grateful to our many, many collaborators, locally and from all around the world, for their fantastic support."

Professor Lorna Harries, an expert in the effects of endocrine disrupting chemicals on gene expression and regulation said “I am delighted that our work in this area has been recognised!   It is so good to see that by doing what we love, we may be able to make a contribution to the health of our population and our planet.”

Dr Ceri Lewis, Associate Professor in Marine Biology said: “It’s such an incredible honour for our work on marine microplastics to be recognised with this prestigious award. Working on this global problem can be very saddening at times, particularly when finding so much plastic pollution in our samples from beautiful parts of the world like Galapagos and the Arctic. The attention the plastic issue is now getting however means that there is  a huge amount of fantastic working going on around the World to turn the tide on plastic, to change the ways in which we use plastics and to prevent plastic pollution from entering our oceans. We continue to work with partners around the World to both better understand the problem and develop and test sustainable solutions."

“The pivotal research carried out by our world-class team of experts in this field has already had a crucial impact in showing just how detrimental plastics and  microplastic pollution is to the natural environment..

“It has also played a significant role in challenging us all to think about how we use plastic in our everyday lives, and find ways to reduce its use. We congratulate the whole team for their success with this richly deserved award.”

The pioneering research achieved a series of notable successes.

These include giving advice to a cross-party committee of MPs sitting on the UK Environmental Audit Committee, conducting an inquiry into the environmental impact of microplastics. The oral evidence played a considerable role in the subsequent decision by the Government to ban the use of plastic microbeads in cosmetics in the UK, which came into effect in 2018.

The research also helped shape the Government’s most recent blueprint to improve the natural environment, called ‘A Green Future: Our 25 Year Plan to Improve the Environment’. The research team gave briefings to Cabinet Ministers on their projects into marine plastic pollution, while one of the reports central themes, eliminating all “avoidable” plastic use by 2042, echoed many of the findings from the institution’s research projects.

The impact on human health has most recently been shown in one strand of the research project that showed that 86 per cent of Devon teenagers have traces of bisphenol A (BPA), a chemical compound used to make plastics, in their body.  Measurable levels of BPA, an endocrine-disrupting chemical, were found in the urine of the vast majority of the 94 17-19 year olds tested. These results supported calls for better labelling of packaging to enable consumers to choose BPA-free products.

The University of Exeter last won the award in 2007 in recognition of its expertise in transforming the lives of hundreds of diabetes sufferers. In 1996,  the Dean of the then Peninsula Medical School, Professor John Tooke, won a Queen's Prize for work on diabetes research, while in 1998 the University also secured an award for its research into children’s health and exercise.

Sir Damon Buffani, the Chairman of The Royal Anniversary Trust said: “The Prizes are granted every two years by The Queen and are the most prestigious national honour awarded to UK universities and colleges for their work.  Entries in the scheme are invited in any subject area and are subjected to rigorous independent assessment in a process managed by the Royal Anniversary Trust.

“Recommendations for the Queen’s approval are made on the prime minister’s advice.  The criteria are demanding and look for outstanding excellence in the chosen field,  for innovation and for evidence of real public benefit.  Competition is strong and the award is a mark of high quality in education and training which is widely recognised internationally as well as in the UK.”