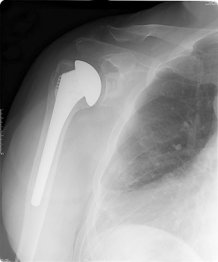 More than 90 per cent of shoulder replacement implants last more than ten years, according to the largest study of its kind.

The study led by the University of Exeter and the National Institute for Health Research Applied Research Collaboration South West Peninsula (PenARC), and published in The Lancet Rheumatology examined data on nearly 18,000 people who have had shoulder replacements, an increasingly common procedure.

The study found that at ten years, more than 90 per cent of shoulder replacements were still working well, and that patients continued to report that the operation had benefitted them.

Jon Evans, Orthopaedic Registrar and NIHR Clinical Lecturer at the University of Exeter Medical School, who led the collaboration, said: “Our findings provide valuable and overdue information for patients and clinicians considering shoulder replacement surgery. To our knowledge, this study is the first to provide a simple and generalisable answer to two very important questions: how long does a shoulder replacement last, and will my shoulder be better in the long-term after surgery? We found that shoulder replacements have a sustained positive effect on patients’ lives for at least ten years, in more than 90 per cent of cases. Our data will also be useful for those commissioning health-care services enabling them to plan the provision of future revision services.”

The research collaboration involved the University of Bristol, the NIHR Bristol Biomedical Research Centre, and Bristol’s Southmead Hospital, the Nuffield Department of Orthopaedics in Oxford, and the NIHR Oxford Biomedical Research Centre. The study was funded by NIHR, the National Joint Registry for England, Wales, Northern Ireland, and Isle of Man, and the Royal College of Surgeons of England.